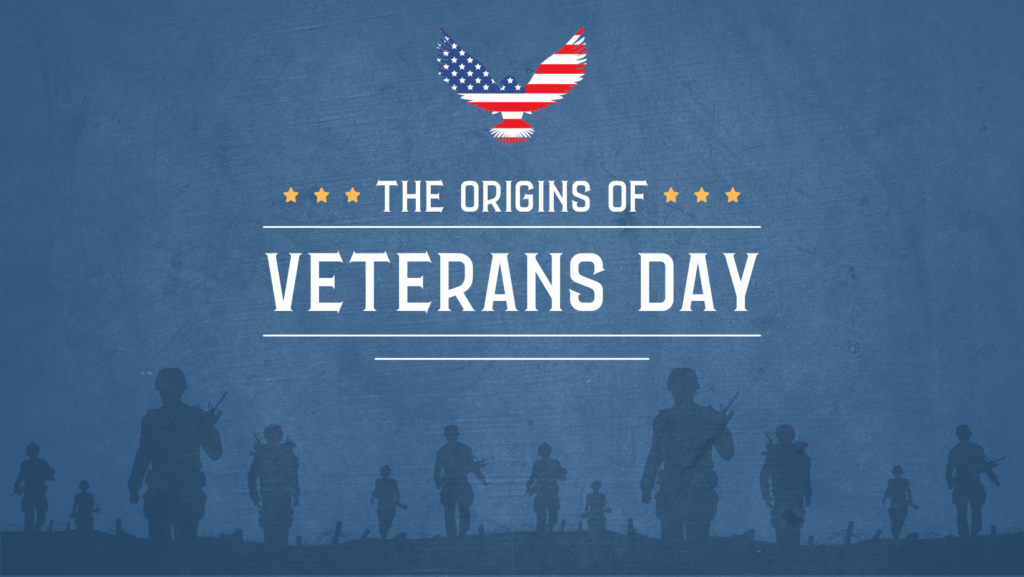 Have you ever wondered how Veterans Day came to be? There’s an interesting history behind it and we’re taking a look at the origins of the day and its lasting legacy.

The Significance of November 11 & Armistice Day

Many people wonder why November 11th was chosen for Veterans Day, but it’s first important to know that this day used to be referred to as Armistice Day. That bit of history is where we begin.

On November 11, 1921, an unknown American soldier who was killed in World War I was buried at Arlington National Cemetery in Arlington, Virginia. These 639 acres, which offer views of Washington D.C. and the beautiful Potomac River, are the final resting place for approximately. 400,000 U.S. military veterans today.

That date – November 11, 2921 – was also when unknown soldiers were interred at the highest national places of honor in both England and France – Westminster Abbey and the Arc de Triomphe, respectively.

Because these memorials occurred on November 11, and because 11 a.m. on November 11, 1918 was the official end to World War I, the day was declared to be Armistice Day by Congressional resolution in 1926. Twelve years later in 1938, it became a national holiday in the United States.

But why was it called Armistice Day? The idea here was a hope –and for some, a belief – that World War I was the “war to end all wars.” As we know, that didn’t turn out to be true. Just a few years after Armistice Day had been declared a national holiday, another war broke out in Europe – World War II – in which approximately 407,000 Americans died.

A Name Change to Reflect the Honoring of All Veterans

According to the U.S. Department of Veterans Affairs, “the first celebration to use the term Veterans Day occurred in Birmingham, Alabama.” A World War II veteran names Raymond Weeks organized a parade and other festivities to honor all veterans. He called it “National Veterans Day” and was held on November 11, 1947.

On June 1, 1954, legislation drafted by a U.S. Representative from Kansas was passed and President Eisenhower signed the bill to officially make November 11 Veterans Day. There was a change to this in 1968 in which Veterans Day was moved to the fourth Monday in October. However, after backlash because November 11 is such a significant date for many, it was changed back to November 11.

Every year on Veterans Day, a combined color guard from all branches of the U.S. military lay a presidential wreath on the Tomb of the Unknown at Arlington National Cemetery and taps is played on the bugle. Ceremonies take place all throughout the United States and are typically coordinated by various committees and veterans organizations.

From all of us at REE Medical, we wish a Happy Veterans Day to all veterans!