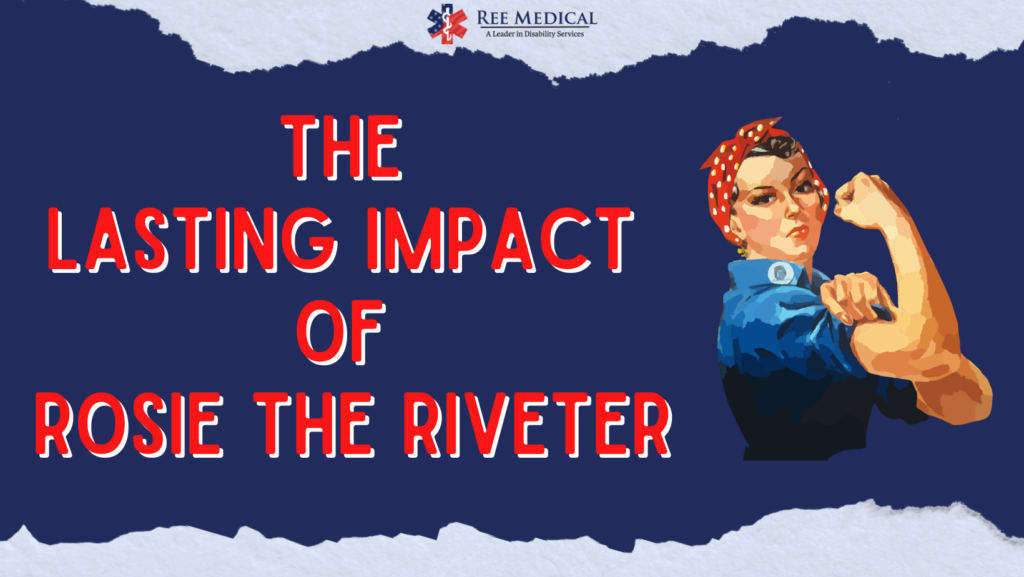 Created in 1942 by artist J. Howard Miller, the Rosie the Riveter poster and the associated tagline of “We Can Do It!” was meant to encourage women to join the workforce during World War II. It accomplished that goal but has had lasting effects on women ever since. Read on to learn more about the history and impact of Rosie the Riveter!

How Rosie Got Her Start

In 1942, an ever-increasing number of American men were recruited and sent overseas to support the war effort during World War II, leaving a large gap in the workforce throughout the United States. The government needed a way to convince women to enter the workforce – especially into industrial positions – and thus what is called the “Rosie the Riveter” campaign was created.

The first and most recognizable image of Rosie is of her flexing her arm and rolling up her sleeve. The image is set against a yellow background and is accompanied by a tagline that reads “We Can Do It!”, which was created by J. Howard Miller in 1942 and thought to be part of the Westinghouse Electric Corporation’s push to recruit female workers. The idea was then expanded upon a little by Norman Rockwell a short time later.

Rosie’s image is said to not be modeled after any one woman, but it’s thought that Rosie may be Geraldine Hoff Doyle who worked at a Navy machine shop, Rose Will Monroe who worked as a riveter in Detroit, or Naomi Parker Fraley who was an aircraft assembly worker and who appeared in numerous newspapers at the time.

With the men at war, the women needed to step up, and that’s exactly what they did. Up to this point in history, many of these now-available positions were never open to women. Women jumped at the chance to prove they could do these jobs as well as men. They proved that, and the world was forever changed after the fact.

The campaign turned out to be one of the most successful recruitment campaigns in the history of the United States. According to History.com, “between 1940 and 1945, the female percentage of the U.S. workforce increased from 27 percent to nearly 37 percent, and by 1945 nearly one out of every four married women worked outside the home.”

Rosie encouraged women to drop their aprons and enter the workforce, and during the war, they benefited the aviation industry the most. It is thought that by 1943, the aircraft industry in the United States was comprised of approximately 65% women! A few years prior, that number had been around 1%.

Rosie the Riveter continued to have an impact on women and the workforce after the war ended and the men came home. While pre-war norms returned and the number of women within the workforce declined, families realized that they could have more if women could join the workforce and be successful. By the mid-1960s, a number of families had decided to take advantage of two incomes, meaning there were more married women in the workforce than perhaps any other time in U.S. history.

Throughout the years, we’ve seen Rosie reappear and continue to encourage women in many ways.

In 1943, a song called “Rosie the Riveter” was written and recorded by Redd Evans and Jon Loab. That same year, Norman Rockwell’s depiction of Rosie – a much more muscular one – appeared on the cover of the The Saturday Evening Post.

In 1982, Norman Rockwell’s “We Can Do It!” poster was reprinted in the Washington Post Magazine in an article about poster collections in the National Archives.

In 1999, a stamp featuring Rosie the Riveter was issued by the U.S. Postal Service as a part of their popular “Celebrate the Century” stamp series.

Then and now, Rosie the Riveter is undoubtedly the most iconic image of working women in our country’s history.